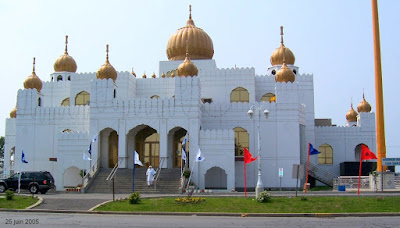 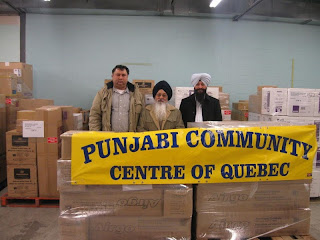 The Editors, Punjabi Dunia weekly, please find attached Medical equipment and accessories cargo-load expressly needed in worst Earth quake hit Haiti, shipped by Centre Communaute des Punjabis du Quebec, sponsored by Gurdwara Sahib Guru Nanak Darbar , Lasalle, Quebec. The Cargo was requisitioned by the Chairman Gurcharan Singh Banwait in association with Ontario Sikhs of IPF. Readers are requested to recall, some times back Punjabi Community gave a call to gather Food Stuff only, but Organizers at Relief Center at Port-Au-Prince, Haiti were heard discouraging such relief and opted to collect money instead.But lately the Relief Organizers issued a demand for medical requirements on the Internet. We picked up that call and expressly delivered that demand in less than 20 hours time in Haiti.

The PCC Centre is indebted and likes to thank the following in meeting that exigency.

-Bibi Jasbir Kaur of GGND, who issued the awareness call and commitment to raise $5000.00

"CENTRE COMMUNAUTE DES PUNJABIS DU QUEBEC " is a non- profit organization, charted since 1981. Does similar service since then.

Also vote of thanks is due to the Editors of Punjabi Dunia Weekly processing it in along with its Photo Gallery without charging a single cent.

If anyone has any information regarding donating the equipment or give a donation please contact us at GGND. 514-578-2510 OR j.seyan@hotmail.com

Posted by Gurdwara Guru Nanak Darbar at 10:27 AM 1 comment: